Tool2 is a web-based city making tool helping initiatives to talk to the “right“ civil servant, the challenge of many innovative city-making groups. By adding information you have about your city-making idea (place, topic, idea/word, or a person at the municipality, you talked to), the tool will return to you instantly with suggestions on suited civil servants to talk to. These civil servants are experienced in projects similar to yours in one way or another or role within a department that you need to communicate with.

The tool facilitates a first step to a face-to-face meeting. It serves the initiative taker as well as the civil servant. The tool seeks to connect spatial information (local, but also international) with people. Also, it serves as an inventory of existing initiatives for mutual knowledge exchange.

The tool is in the stage of modelling (clickable prototype) and needs further technical and user experience development:(click on the image in order to go to the prototype) 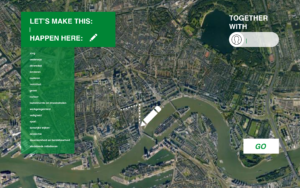 Tool2 was developed together with future users of the tool: experienced initiators of Rotterdam city-making groups and organisations, such as cultuurscout Rotterdam, Stadslab Cool-Zuid, Marconia, and Stadslab Luchtkwaliteit. Also, several civil servants of different municipal departments were invited to co-create and co-design this tool.

The iterations were based on workshops and one-on-one interviews. Various methods for RtD were used, such as the users’ own experiences, a fictive case, an image depicting the elements of the concept, and paper prototypes. By doing so, the team could in a co-creative way fully explore the possibilities of the concept as well as the user experience.